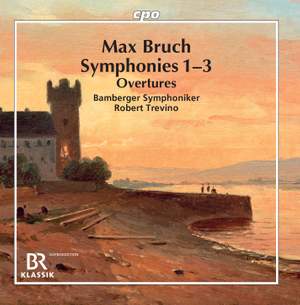 This is a lovely cycle. Max Bruch’s reputation still surely rests on his First Violin Concerto and on the Scottish Fantasy. That won’t change. But Bruch’s special brand of solemnity, his blossoming... — Fanfare, Nov/Dec 2020 More…

Max Bruch’s three symphonies, composed between 1868 and 1882, were originally intended as a series of works forming a trilogy. However, Max Bruch set aside the third part in order to focus on dramatic and choral symphonic projects. He first wanted to write his second opera, Hermione after The Winter’s Tale by William Shakespeare, and Odysseus, his first secular oratorio. As things turned out, the spectacular long-term success of these musical pictures from antiquity meant that his original symphonic project was relegated to the back burner. However, once we experience the three sister works in their originally planned context, as the present new production enables us to do, the tide turns in their favour. The revealing path from the heroic idea underlying the first symphony, which, by the way, we are presenting for the first time in its original five-movement version, over the tragic stance of the second symphony, to the "Rhine idyll" of the third symphony leads us to the realization that this triad deserves much more credit than its meagre performance figures would make us believe.

This is a lovely cycle. Max Bruch’s reputation still surely rests on his First Violin Concerto and on the Scottish Fantasy. That won’t change. But Bruch’s special brand of solemnity, his blossoming tone painting, his French horn serenity and rich string warmth, as we encounter them in the symphonies and overtures, offers found gold of its own.

Bruch’s three symphonies are a gift to a sympathetic interpreter, and Robert Trevino joins a select group of conductors who have succeeded in making these awkward but intensely lovable works sing…But the main selling-point here is the playing of the Bamberg Symphony Orchestra; a real asset in music that needs to glow from within...This is music of rolling vistas, sunlit hillsides and good wine, and the sound of the Bambergers suits it beautifully.

[The First Symphony is] easily the least convincing of the three; in their quiet way the second and third, finished in 1870 and 1887 respectively, are much more rewarding, and need just the kind of sympathetic handling they get from Robert Trevino and the Bamberg Symphony.