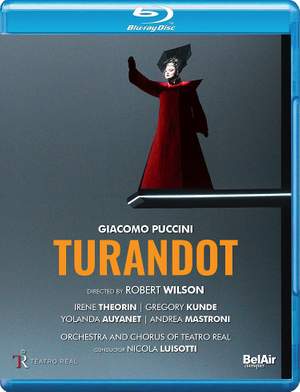 Theorin, noted for her Wagnerian roles, provides the requisite vocal heft as Turandot, and Gregory Kunde is an equally powerful Calaf…The orchestra and chorus of the Teatro Real under conductor... — BBC Music Magazine, August 2020, 3 out of 5 stars (Performance) / 4 out of 5 stars (Sound & Picture) More…

Giacomo Puccini wrote what was supposed to be his last opera at a time where, riddled with disease and old age as he was, he felt like his own turmoil was reflected in the outside world: itself staggering, unsteady, overwhelmed and smashed by the chaos of European diplomacy. In spite of these obstacles, he persevered and worked until the very end of his life on this opera that he left unfinished but that proved to be a “way out” for him in many ways. Drawn from an ancient Persian epic from the 13th century, Turandot was indeed an excuse to escape into a new dramatic universe, one made of unexpected sounds and symbols. Here, in a world removed both geographically and chronologically from his own reality, he gave into the seductive powers of exoticism and eroticism, just as his own heroin Princess Turandot abandons herself to the mysteries of love and forgiveness. After twenty years of absence, Puccini’s Turandot was revived on the stage of the Teatro Real in a new production by American stage director Robert Wilson.

Theorin, noted for her Wagnerian roles, provides the requisite vocal heft as Turandot, and Gregory Kunde is an equally powerful Calaf…The orchestra and chorus of the Teatro Real under conductor Nicola Luisotti make a consistently impressive contribution to the musical whole…Ultimately though, and through no fault of the performers, this feels like a park-and-bark performance masquerading as a ‘concept’.

Not just an icy block of a soprano, nor just an application of weight to Puccini’s notes, Iréne Theorin is at the same time potent and sentient.
Gregory Kunde has all the necessary notes for Calaf, his striking tenor disciplined and lyrically empowered, with plenty of heft but no bawling...Luisotti pushes the score forwards, highlighting its brilliance and sharp modernist edges.