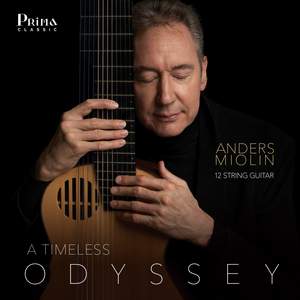 Dowland: Fantasia No. 7 from A Varietie of Lute Lessons

Kellner, D: Fantasia in A minor

The completely unique Dodeka guitar was developed by Ermanno Chiavi and Anders Miolin in 2017 Anders Miolin is the only musician in the world who plays it. The 12-string guitar has an extended tuning range and creates a previously unheard, fascinating sound universe.

The fusion between artist and instrument creates new and unique programs consisting of rare pearls from the Baroque, Classic, Romantic and Impressionist periods, as well as new works specially composed for the Dodeka guitar.

"Life is an odyssey. We all carry it literally within us, in our genes and souls, experiencing it throughout our lives. This odyssey starts in Seville, Spain in 1546 and takes us through England and Germany (16th century), Sweden and the Baltics (17th and 18th centuries), Paris (late 19th century) and New York (20th century) to a dreamscape in 2019. My search for sound has also been an odyssey that has led me to extensive research of the repertoire and the development of the 12-string Dodeka guitar. It is a unique instrument built by Ermanno Chiavi. My idea was to expand the range and the sound spectrum of the traditional guitar, enabling new arrangements and compositions. Just as Odysseus altered his appearance, these free arrangements alter the pieces' appearance but not their substance the borderless odyssey of the soul." Anders Miolin

Anders Miolin is professor at the Zrich University of the Arts and an internationally acclaimed concert and recording artist. Anders Miolin's discography encompasses solo CDs of Satie, Debussy, Ravel, Granados, Villa-Lobos, and British music, released on the renowned label BIS.