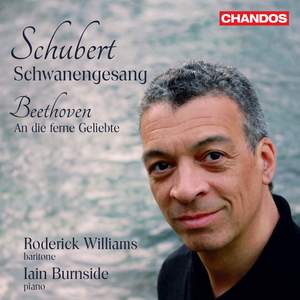 Williams is effortlessly boyish in the Beethoven, matched by Iain Burnside’s transparent sound. The Schubert begins relaxed, but emotions are soon ratcheted up. Burnside’s unhurried pace and... — BBC Music Magazine, July 2020, 4 out of 5 stars (Performance) / 3 out of 5 stars (Recording) More…

Roderick Williams writes: “Although only twelve years separate the composition of Beethoven’s An die ferne Geliebte and Schubert’s Schwanengesang, the ethos and sound world of the two works are markedly different. Pairing them on the concert platform seemed an obvious choice on one hand, but I was reminded not to try to perform Beethoven in the way I perform Schubert. For one thing, the former still has the ring of the late classical, while the latter explores the darkness of the early romantic. For this reason, we decided to record the two works in slightly different soundscapes. In An die ferne Geliebte, the inventiveness of Beethoven is best expressed in the piano writing, while the vocal part is deliberately simple, strophic (the music is repeated for each stanza), and folk-like. ...the sixth song states that these songs are offered ‘ohne Kunstgepräng’. And so we have set the voice slightly more distantly in the balance, giving the piano due prominence; the effect is almost as if I were singing over Iain’s shoulder. Schwanengesang is recorded more traditionally: in these most extraordinary and progressive songs the vocal line is supported by the piano, in equal partnership."

Williams is effortlessly boyish in the Beethoven, matched by Iain Burnside’s transparent sound. The Schubert begins relaxed, but emotions are soon ratcheted up. Burnside’s unhurried pace and clear pedalling reveals each detail of these beautifully crafted miniatures. Williams’s Ständchen offers a honey-smooth seducer, albeit with a heart of gold…I longed for just a few more rough edges in this beautifully polished recording.

Williams sings German as a non-native speaker in the best sense, harnessing the words with a sense of discovery of how much closer they bring him to the archetypes within the various verses... And it’s on this front that his reading of the Beethoven cycle shines...Williams fires on all cylinders here, including some I didn’t know he had, and his longtime admirers won’t want to miss this.