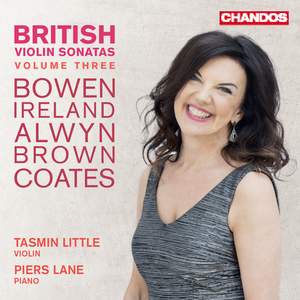 The performers respond to both aspects of [Bowen's] music with muscular virtuosity and affection. Especially in the high tessitura of the slow movement, Tasmin Little’s tonal variety and rhythmic... — BBC Music Magazine More…

Bowen: Sonata in E Minor for Violin and Piano, Op. 112

Ireland: Violin Sonata No. 2 in A minor

I. Allegro - Tranquillo - Tempo I

Alwyn: Sonatina for Violin and Piano

Tasmin Little and Piers Lane complete their three-album overview of British violin sonatas with works by York Bowen, John Ireland, William Alwyn, Eric Coates, and the world premiere recording of James Francis Brown’s The Hart’s Grace. Composed for the inaugural Hertfordshire Festival of Music, the work was premiered by Tasmin in Hertford in June 2016. The central premise of The Hart’s Grace is the emotional transformation experienced by a restless observer when encountering the almost magical, elusive freedom of the deer. John Ireland composed his Second Sonata between 1915 and 1917, dedicating it to Albert Sammons who gave the premiere. Alwyn’s Sonatina dates from 1933, whilst the Coates and Bowen pieces were both composed during the Second World War (1943 and 1945 respectively). Coates’s First Meeting was commissioned by Lionel Tertis and originally conceived for viola, but it was revised for violin for its publication (in 1943).

The performers respond to both aspects of [Bowen's] music with muscular virtuosity and affection. Especially in the high tessitura of the slow movement, Tasmin Little’s tonal variety and rhythmic freedom capture the romantic outpouring...[The Ireland] receives a performance which mirrors the conviction of the composer.

[Bowen] The sonata, as a whole, strikes me as a very well put-together work by a master craftsman. It’s technically taxing, especially in its finale, and Little plays it brilliantly.

Little brings out [the Ireland's] stark contrast with impressive aplomb, the wonderful emergence of the effulgent second subject from the bleaker first being one such example. Lane’s nuanced handling of the capacious accompaniment is also insightfully executed

Little’s repertoire has always been extensive and inquisitive, her dedication to less familiar British repertoire a cornerstone of her career...Both [the Ireland and the Bowen] suit Little’s openly expressive, romantic sound and fluid virtuosity: a generous player, she’s sure to find fresh outlets for her musical insights away from the concert platform. Let’s be glad she’s put this repertoire firmly back on the map.

dedicated and insightful performances ... None of these pieces are well known, yet these gifted artists create the impression of having been playing them for years