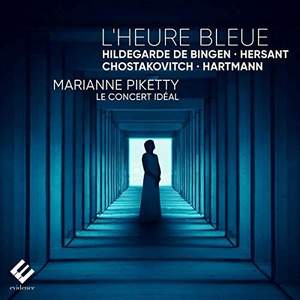 The blue hour is the moment between the end of the night and the daybreak, when one can see it appear before it has risen: this little breach through time allow us to foresee. Marianne Piketty and the Concert Idéal gather several works written by visionary composers: the mystical chants of Hildegard von Bingen, known for having experienced visions and Hartmann’s Concerto Funebre which announces the horrors of the nazis.

Philippe Hersant and Dmitri Shostakovich complement the programme as their works echoes to these musical visions. After the success of Le Fil d’Ariane, Marianne Piketty and Le Concert Idéal continue their exploration of time as they unite these works over the ages, for a prophetic recording.