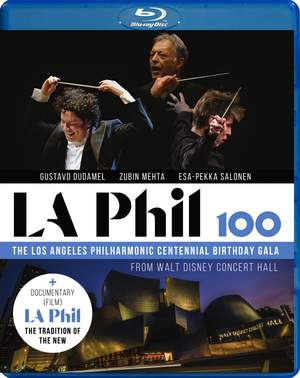 Plenty of the Phil’s strengths are on show, chief among them the rhythmic sophistication and clarity instilled during 17 seasons under Esa-Pekka Salonen and his diet of 20th-century music including... — Gramophone Magazine, August 2020 More… 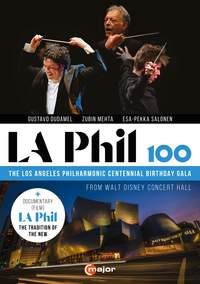 Bjarnason: From Space I Saw Earth

"A century to the day after the orchestra’s first concert on 24th October 1919, the centennial season culminates in a “splashy gala night” (San Francisco Classical Voice) at the Walt Disney Concert Hall with the current and former chief conductors Dudamel, Mehta and Salonen sharing the podium. The repertoire is a true reflection of the DNA that makes the LA Phil the LA Phil and “the defining factor of this orchestra is its ability to blend genres and styles to create totally new takes on classical works.” (The Guardian) The New York Times recently called the LA Phil “America’s most important orchestra. Period”. Look no further than this concert´s program: Ravel's La Valse - Zubin Mehta; Lutosławski's Symphony No. 4 - Esa-Pekka Salonen; Strawinsky's Firebird Suite - Gustavo Dudamel and the World Premiere of Daníel Bjarnason's New Work for Three Conductors!

BONUS LA Phil – The Tradition of the New

The documentary portrays the LA Phil and its continual creative reinvention on the occasion of this jubilee. Including a historical part to trace the steps that played a part in where the orchestra stands today + interviews with the current and former chief conductors Dudamel, Mehta, Salonen, Frank Gehry, John Adams + music critics, and members of the Los Angeles Philharmonic staff."

Plenty of the Phil’s strengths are on show, chief among them the rhythmic sophistication and clarity instilled during 17 seasons under Esa-Pekka Salonen and his diet of 20th-century music including Lutosławski…The orchestra plays lovingly for Dudamel in the suite from Stravinsky’s The Firebird, finding even more sensuality here than in Zubin Mehta’s airy La valse…Dudamel has the best technique of all three and is great to watch on screen, the music always seeming to surprise him and widen his eyes still further.