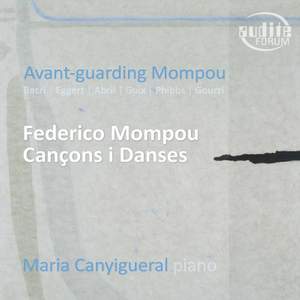 To be played after Mompou's "Cancion 6"

Mompou: Cancion i danza No. 10

Mompou: Cancion i danza No. 11

Mompou: Cancion i danza No. 12

Mompou: Cancion i danza No. 14

Works by Federico Mompou, Antón García Abril, Josep Maria Guix, Konstantia Gourzi, Nicolas Bacri, Joseph Phibbs, Moritz Eggert Influenced by the French Impressionists, Mompou’s Cançons i Danses are juxtaposed in the pre- sent recording by commissions from nine other composers, four of them Spanish, one Greek, one Czech, one French, one English and one German. This compilation of works reveals some surprising cross-references and at the same time helps to explain our idiosyncratic title: ‘Making Mompou our contemporary’.