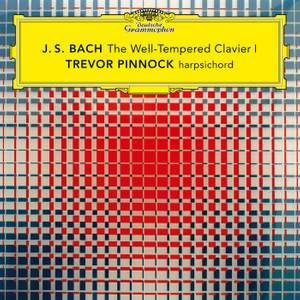 Because Trevor Pinnock’s solo harpsichord forays are few and far between these days, it’s easy to forget just what a superb player he was, and still is, judging from his first complete recording... — Gramophone Magazine, August 2020 More…

Trevor Pinnock is a true pioneer of the early music movement As founder and former leader of The English Concert he enjoys a longstanding relationship with Archiv Produktion and Deutsche Grammophon Among his celebrated recordings are Bach’s Brandenburg Concertos Handel’s Messiah and Concerti Grossi Vivaldi’s Four Seasons The Harmonious Blacksmith Bach’s Goldberg Variations and Partitas Throughout his interpretations Pinnock remains true to his core principles favouring musicality and inspiration above musical orthodoxy Achieving an exceptional reputation as a conductor, chamber musician and harpsichordist he has received enthusiastic critical acclaim.

With his first recording of The Well Tempered Clavier (Book 1) Pinnock explores the summit of Bach’s intellectual and contrapuntal mastery “My journey with the Well Tempered Clavier has been life long. I first encountered it at about 12 years old when someone gave me a pink and gold bound volume, the old Czerny edition, which we now know to be notoriously unreliable. This gave me hours of discovery. A few years later, I heard all the preludes and fugues played on the piano on the radio, and I was hooked. In my twenties I myself recorded some preludes and fugues for radio broadcast, and I knew then that one day I would play them all. The mountain seemed insurmountable, however, and Bach a formidable and severe task master how could I possibly delve into the density of some of those fugues, let alone understand them?

So, although I subsequently performed various others of the preludes and fugues, any plan to record all of them was repeatedly postponed by increments of ten years until quite recently, when I decided I could put it off no longer. Now they will be a central part of me for the rest of my life."

Because Trevor Pinnock’s solo harpsichord forays are few and far between these days, it’s easy to forget just what a superb player he was, and still is, judging from his first complete recording of Bach’s Well-Tempered Clavier Book 1...Pinnock is a direct and straightforward player. He avoids the exaggerated articulation and agogic mannerisms that way too many period-instrument practitioners deem stylish.