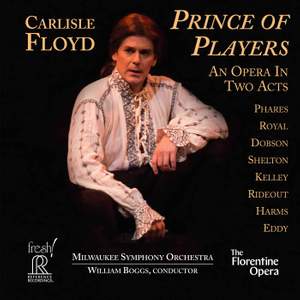 The performance is excellent. As Kynaston, baritone Keith Phares sings well, articulates the text clearly, and is very touching in a role that requires a wide dramatic range. Kynaston has a bar... — Fanfare, September/October 2020 More…

Not Again, Never Again! I Shall Not Be Humiliated Again!

Do You Know How Many Roles We've Seen You In?

Oh! You Startled Me!

The Duke of Buckingham, Your Majesty

Ned, Are You Alright? You Look a Fright

Gents, It's My Esteemed Pleasure to Introduce

Shall I Get a Physician?

Bring Mistress Hughes to the Stage at Once

World Premiere Recording! The Florentine Opera brings Carlisle Floyd's daring new opera, "Prince of Players", to life! Floyd is one of the foremost composers and librettists of opera in the world today, and is considered the "Father of American Opera." During his long career, Floyd has composed 13 operas. His most recent, "Prince of Players", which premiered in March 2016 at the Houston Grand Opera, is based on the true story of Restoration-era actor Edward Kynaston (1640–1706). The plot centers on the crisis faced by Kynaston when, by royal decree, he is prohibited from plying the craft that made him famous—playing female roles. With this Milwaukee production, the Florentine Opera gives Prince of Players its world-premiere live recording.

The performance is excellent. As Kynaston, baritone Keith Phares sings well, articulates the text clearly, and is very touching in a role that requires a wide dramatic range. Kynaston has a bar fight, two love scenes (one with each gender), and scenes where he portrays a Shakespeare character. Dramatically, Phares seems thoroughly inside the role. Kate Royal sings beautifully as Peg Hughes and is equally convincing dramatically.