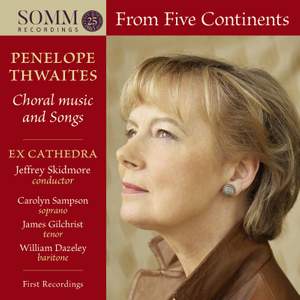 Lively, catchy and imaginative …The beautifully wrought Missa Brevis is a model of concise, integrated and well contrasted writing, with some inspired moments. — BBC Music Magazine, July 2020, 4 out of 5 stars More…

Thwaites: Psalm 24 (The Earth Is the Lord's) [Version for Soprano, Mixed Choir & Organ]

Thwaites: Psalm 121 (I Will Lift-Up Mine Eyes) [Version for Mixed Choir & Organ]

Thwaites: Psalm 23 (The Lord Is My Shepherd)

All the Days of Christmas

No. 1, Under the Greenwood Tree

No. 3, When Icicles Hang by the Wall

A Carol of Christmas Morning

"Featuring 19 premiere recordings, From Five Continents celebrates a lifetime of making music around the world to showcase Penelope Thwaites’ distinctive compositional signature. The disc’s centrepiece, a moving new Missa Brevis, is coupled with four Psalm settings, songs influenced by the sounds of Indian and African music, folk-styles from the Americas and an evocation of the vast Australian outback.

Enveloped by drums and saxophone, tenor James Gilchrist returns to SOMM for a stirring tribute to Nigeria’s second-largest city, Kano. The composer herself provides exceptional accompaniment on piano throughout the disc. Also returning to the label is Ex Cathedra under their inspiring conductor Jeffrey Skidmore to demonstrate again a rare versatility and the most beautiful of choral sounds while revelling in the punchy, rhythmic vivacity and telling colours of Thwaites’ music."

Lively, catchy and imaginative …The beautifully wrought Missa Brevis is a model of concise, integrated and well contrasted writing, with some inspired moments.

Impeccably tended performances, which sets each song as a real musical gem… really worthy additions to the long tradition of Shakespeare verse settings.

The variety is remarkable, as is the level of invention and the concise, effective way Thwaites composes.

Open-hearted vitality, joy and simplicity – the art that conceals art – works in … a lovely performance by Ex Cathedra under Jeffrey Skidmore.

A melodiously gifted composer…the way in which the choir is used to create drama is a highlight...recorded in the fine sound for which SOMM has become known.

Ought to have singers and choirs, interested in new repertoire, pricking up their ears.

Thwaites has a voice of her own … and creates something intriguing and original.