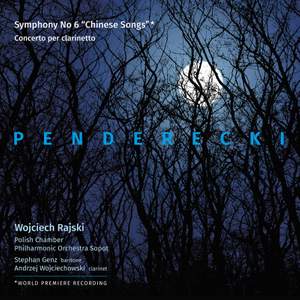 Vivid and dramatic soundworlds in both of these works, with the symphony Chinese Songs recorded here for the first time. The concerto, older of the two works by some 30 years, is given a yet... — BBC Music Magazine, October 2021, 3 out of 5 stars More…

Two musical orders meet in the programme of this album, both with reference to the most broadly conceived music history and to the universe of Krzysztof Penderecki’s output. Apart from the opera, which holds its own separate place, they are the two largest-scale formal orders in the musical art: those of the symphony and the concerto, which represent two fundamental ideas: respectively, those of co-operation and of competition. Krzysztof Penderecki’s symphonic writing is one of the most important elements of his output as a composer, and possibly the most fascinating one. The composer himself frequently emphasised the autonomous identity of his symphonic oeuvre both in the context of Polish works in this genre and in the broad perspective of Western music. Despite the distance of more than 30 years that separates the Clarinet Concerto from Symphony No. 6, the two works are both evidence of a similar turn in Krzysztof Penderecki’s artistic stance – a turn from monumentalism to an intimate and internally lucid type of musical statement.

Vivid and dramatic soundworlds in both of these works, with the symphony Chinese Songs recorded here for the first time. The concerto, older of the two works by some 30 years, is given a yet more engaging performance.

Wojciech Rajski and the Polish Chamber Philharmonic Orchestra Sopot are first-rate in both works. The recorded sound is excellent. Urgently recommended.