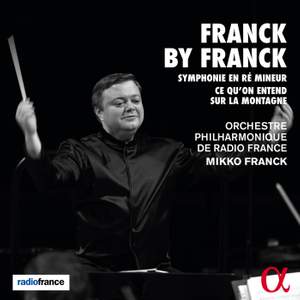 Grandeur there is in plenty, but also light-heartedness…this honest, impassioned performances imbues [the Symphony] with a surprising power. Integrity also shines through the playing of the symphonic. — BBC Music Magazine, July 2020, 5 out of 5 stars (Performance / 4 out of 5 stars (Recording) More…

Some music lovers are familiar with Ce qu’on entend sur la montagne, Liszt’s symphonic poem based on Victor Hugo. But who knows that, ten years earlier, César Franck was inspired by the same poem? This early piece is recorded here by the Orchestre Philharmonique de Radio France conducted by Mikko Franck. They couple it with the famous Symphony in D minor, dedicated to Henri Duparc and premiered, without much success, in 1889. Even if the score is quite well-known today, in the end it is performed quite rarely, which is a pity, because it really has all the characteristics of a masterpiece: melodic and harmonic inspiration, refined orchestration, variety of mood, an ingenious structure. Two works by Franck... by Franck! This album marks the beginning of a collaboration between Alpha and the Orchestre Philharmonique de Radio France, which will focus on very varied repertories.

Grandeur there is in plenty, but also light-heartedness…this honest, impassioned performances imbues [the Symphony] with a surprising power. Integrity also shines through the playing of the symphonic.

His tempos in the Franck Symphony are normal, about the same as Monteux’s famous Chicago version, but Monteux had a more explosive and less Wagnerian idea of the piece. Franck gives us an exciting, sweeping performance where everything glows within the texture and nothing sticks out of it. It’s rich, moves beautifully, and never conveys tizzy melodrama, the way Munch’s Boston Symphony performances used to.

The Symphony gets a fine performance here. Franck understands its logic and tensions, its balance between weight and elegance, its Wagnerian overtones and moments of sensuousness. The orchestral sound is dark yet clear...Franck balances immediacy with pace and proportion...the playing has great richness and fervour, with the woodwind and brass particularly fine in both works.

Mikko Franck’s surname makes you hope he’ll do a decent job with the piece, and indeed he does, helped by a well-drilled Orchestre Philharmonic de Radio France, unashamed to let rip in the more garish climaxes. Franck’s central movement is a structural delight, nicely played here, and we really get to hear the cornets in the symphony’s closing bars.