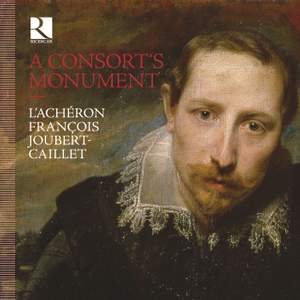 Simpson, C: Improvisation Upon a Ground (After Christopher Simpson)

Ferrabosco, A II: Four-Note Pavan a 5

Ferrabosco, A II: Fantasia VI a 6

In his Musick’s Monument of 1676, Thomas Mace described in great detail numerous aspects of contemporary musical life in London. This volume evokes all the characteristics of English music, going back to the most glorious years of the Renaissance, with a particular emphasis on the repertory written for consort of viols. While his writings describe the performing practices of the time, they also provide invaluable information on instrument making, which has enabled L’Achéron to build a ‘set’ of six viols following Mace’s indications. For this new project of English music, the ensemble inaugurates a new virginal and an organ made in accordance with the famous theorist’s specifications. The programme comprises fantasias, ayres and dances by composers who brought this viol consort tradition to its peak, including Alfonso Ferrabosco, John Ward, William White, Thomas Lupo, Richard Dering, Giovanni Coperario, William Lawes, John Jenkins and Christopher Simpson.