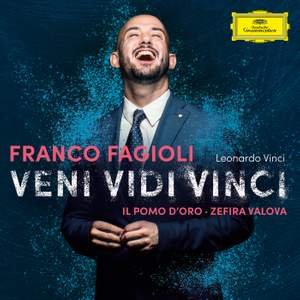 Vinci, Leonardo: Sento due fiamme in petto (from Il Medo)

Fagioli is best in bravura displays…His voice is also capable of touching tenderness…The orchestral playing is supportive, and sometimes delicately and effectively alert.

What a treat it is to have an entire album dedicated to this inventive, prolific Neapolitan. The album’s unusually light on bravura for a Fagioli project, showcasing instead Vinci’s gift for long-lined melody and pastoral word-painting, with Medo’s Sento due fiamme a particular highlight, and some ravishing obbligatos from Il Pomo d’Oro’s winds.