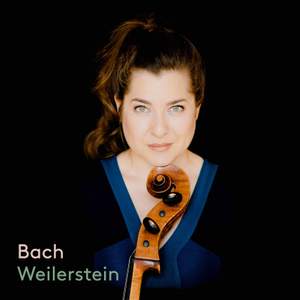 Weilerstein’s special qualities? Her resolve to allow each movement of each suite to shine on its own terms. Hers is not an overview systematically imposed but more a way to facilitate the cycle’s... — Gramophone Magazine, July 2020 More…

After her acclaimed PENTATONE debut with Transfigured Night , Alisa Weilerstein returns with a complete recording of Bach’s Cello Suites. These pieces present the highest mountain to climb for any cellist, and one of the most transcendent and rewarding experiences for listeners alike. With his suites, Bach crafted — essentially without direct precedent — a body of solo cello music that forever defined the genre and brought the Baroque cello on par with its more popular cousin, the viola da gamba. Since Pablo Casals put them in the limelight again after 150 years of relative oblivion, Bach’s suites have become the alpha and omega for generations of cellists. To Weilerstein, the joy of this music — vibrant, contemporary, unquestionably alive — is the joy of her interpretation to the listener.

Since signing an exclusive contract PENTATONE, Alisa Weilerstein has released Transfigured Night (2018), and featured on Inon Barnatan’s Beet hoven Piano Concert os Part 1 as well as Old Souls, an album with music for flute and strings (both released in 2019).

Weilerstein’s special qualities? Her resolve to allow each movement of each suite to shine on its own terms. Hers is not an overview systematically imposed but more a way to facilitate the cycle’s immense expressive range piecemeal. Not that the best of her rivals don’t; but with Weilerstein you enjoy the sensation of being escorted through a Baroque dance hall by an all-encompassing commentator with a comprehensive understanding of what she plays.

The American’s sumptuous sound and modern technique have greater kinship with Casals and his successors than with “period-style” performers, and her spacious readings have something of du Pré’s emotional style...This outstanding artist is a great catch for Pentatone.

What emerges is a performance that unfolds at its own pace and in its own space, inward-looking yet confident – one captured at exactly the right time. And, crucially, it’s a performance that sings: put Weilerstein next to most of her colleagues in these suites (competitors would be the wrong word – Bach doesn’t encourage competition) and she would win for sheer resonance of tone and length of line...There are dozens of recordings of these suites to choose from, but this stands up with the best.