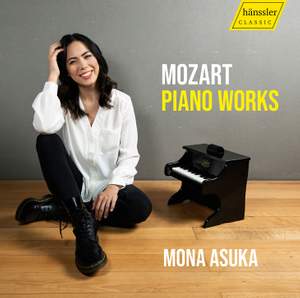 "The young pianist glows with enthusiasm ... but then proves that for all this vigour and exuberance, she also has a keen sense of what lies between the notes and a sensitive awareness of tempo."" (WAZ newspaper).

Born in 1991, the German-Japanese pianist Mona Asuka made her debut in concert performance with the Munchner Rundfunkorchester at the age of eleven. Since then she has received invitations for solo recitals and concerts with famous orchestras from around the world.

From surveying the complete works of Wolfgang Amadeus Mozart, it can be established that of the more than 600 compositions he left for posterity, about a sixth were dedicated to the piano. In contrast to the other two masters of Viennese classical music, Haydn and Beethoven, Mozart's music for solo piano was less of a field for formal experimentation or for expression of individual musical soliIoquy. Mozart wrote his piano sonatas mostly for quite specific practical purposes, whether for performance on his travels, for musical events among a smaller circle of people, or as exercise material for his students."