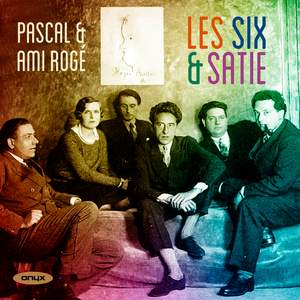 Pascal Rogé, long considered the greatest exponent of French piano repertoire is joined by his pianist wife Ami in a programme devoted to Les Six – the group of composers brought together by Jean Cocteau in 1917 and who created a musical reaction to the suffocating influence of German romanticism upon French musical culture. Based in Montparnasse the name was inspired by Balakirev’s ‘The Five’ and the journalist Henri Collet’s 1920 article ‘Les cinq Russians, les six Français, et M.Satie’ . Satie gets a look in on this album with his ‘Parade’ closing the programme. The CD includes the 1920 L’Album des Six, Scaramouche by Milhaud, Cinq Bagatelles for piano 4 hands by Auric, Two Pieces for 4 hands op.7 by Durey and works by Honegger and Tailleferre.