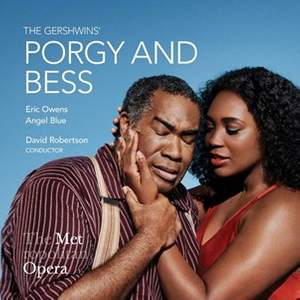 The chorus supplies precision and refulgent tone, while the orchestral playing is clean and idiomatic, with conductor David Robertson shaping an interpretation that is well-paced and offers both... — BBC Music Magazine, June 2020, 4 out of 5 stars More…

To open the 2019–20 season, The Gershwins’ Porgy and Bess returned to the Met stage for the first time in nearly 30 years. The acclaimed new production of America’s favorite opera is captured in this three-CD set headlined by Eric Owens and Angel Blue in the title roles. David Robertson conducts a superb cast, which also features Latonia Moore, Golda Schultz, Alfred Walker, Frederick Ballentine, and Denyce Graves.

Breaking company box-office records, The Gershwin’s Porgy and Bess was even extended for an unprecedented three additional performances in February 2020.

The production was also seen in cinemas around the world on February 1 as part of the Met’s Live in HD series and was one of the most successful transmissions in the series’s history. Seen live on more than 1,900 screens in nearly 60 countries, the opera reached an estimated 191,095 people. And with delayed showings in Australia, Bermuda, Denmark, India, Jamaica, Japan, Korea, New Zealand and South Africa—as well as encore performances in North America and Europe—worldwide attendance of The Gershwins’ Porgy and Bess will surely reach more than 325,000.

“Authoritative and gripping ... The magnificent bass-baritone Eric Owens gives one of the finest performances of his distinguished career … The sumptuously voiced soprano Angel Blue is radiant … Every singer in the cast was outstanding … A splendid Porgy and Bess” —The New York Times

... The Met does the score proud ... A gorgeous Porgy and Bess” —New York magazine

“The Met’s new production of Porgy and Bess is a wonder ... a triumph ... Angel Blue is an extraordinary Bess”. —The Economist

The chorus supplies precision and refulgent tone, while the orchestral playing is clean and idiomatic, with conductor David Robertson shaping an interpretation that is well-paced and offers both good balance and plenty of fine detail…Owens’s grand and enriched baritone helps him convey Porgy’s indomitable spirit in fully three-dimensional form. He’s admirably partnered by Angel Blue, her resplendent soprano soaring aloft as she charts Bess’s emotional complexity.

The cast is strong...Angel Blue’s Bess might just be the finest since Leontyne Price’s...Though lacking Willard White’s vocal ardour, Owens’s stoical conception of the role and grainier vocal quality are by no means incompatible with the older protagonist the story implies...David Robertson conducts with perspicacity, prizing fine detail over swing or drive – which is one way to go.

A happy, indeed magnificent, outcome it is—despite whatever quibbles might arise about ‘cuts’ (the opera exists in a number of different versions)...That aside, the recording is an unmitigated triumph, offering a veritable feast of voices fabulously rich and textured, but also luminous, strong and wonderfully agile. For me, the most memorable are the three sopranos [Angel Blue, Golda Schultz, and Latonia Moore].

Robertson conducts a lively performance, led by Eric Owens’s gruff yet dignified Porgy, while Angel Blue’s lustrous Bess and Latonia Moore’s glorious Serena — who gets the biggest hand of the evening for My Man’s Gone Now — don’t come much better.

Much of the recording was undertaken during the opening night, obviously an occasion when electricity crackled in the air. Right from the start you are hit by the sharp rhythms and drive encouraged by the orchestra’s conductor, David Robertson.