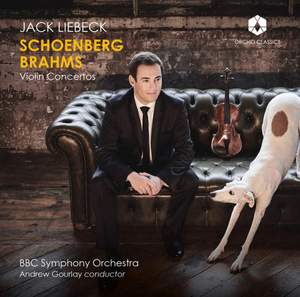 Liebeck responds [to Schoenberg’s technical demands] with astonishing command, allowing the music’s expression to speak with a real degree of freedom, even fantasy, so that the solo part can... — BBC Music Magazine, May 2020, 5 out of 5 stars More…

The violinist talks to Katherine about his BBC Music Magazine Recording of the Month, which was inspired in part by the memory of his grandfather Walter Liebeck - an accomplished amateur violinist and German emigré.

Family history and the present rise of intolerance to others belong to the story behind Jack Liebecks latest album. His pairing of the Brahms and Schoenberg Violin Concertos, recorded with the BBC Symphony Orchestra and Andrew Gourlay, stands as a personal homage to works from classical musics central European heartlands. It also reflects the experience of his Dutch/German Jewish family who suffered at the hands of the Nazis, in particular, his paternal grandfather Walter Liebeck. In 1934 Walter Liebeck, Jacks grandfather, fled the Nazis to find refuge in South Africa. Walters favourite piece of music was Brahms Violin Concerto and although he didnt live to hear Jack play, his love of Brahms seems to be in the genes and now felt the time for Jack to record the work with Walter in his mind. Alongside Brahms comes Schoenbergs vast and highly virtuosic Violin Concerto (1934-36), written shortly after Schoenbergs own departure from Germany in 1933. A fitting work reflecting that period, which seems still to have extraordinary relevance in todays volatile world.

Liebeck responds [to Schoenberg’s technical demands] with astonishing command, allowing the music’s expression to speak with a real degree of freedom, even fantasy, so that the solo part can interact with similarly deft accompaniment by the orchestra. The same qualities shine throughout in a stellar interpretation of Brahms’s masterwork.

The virtuosity and fine detailing of Liebeck’s playing are pretty jaw-dropping but so too are the jewelled precision and sheer lucidity of what Andrew Gourlay and the BBC Symphony Orchestra achieve with the multi-layered orchestral writing.

the Schoenberg has a fine new champion on disc

Liebeck’s lyrical, spacious approach to the Schoenberg concerto should win this still under-recorded work many new fans, and the account of the Brahms (which has similar virtues) also emerges as a serious contender in a much more competitive market, the leisurely orchestral introduction setting the tone for an interpretation that’s refreshingly free from bombast.

Liebeck negotiates the disturbed, dislocated soundscape of the composer’s notoriously challenging Violin Concerto of 1936 with sure technique and unflinching vision. His sound is richer than that of his more silvery-toned recent rival, Isabelle Faust, and he delivers a lyrically tenacious reading of Brahms’s concerto.