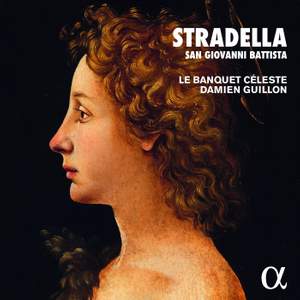 Paul-Antoine Benos-Djian has a beautiful countertenor voice, full and even at both ends of his range, which he uses to superbly expressive effect...Alicia Amo as Herodias the Daughter (Salome)... — Gramophone Magazine, June 2020 More…

Io per me non cangerei

A composer who led a dissolute life and ended up stabbed to death in Genoa, Stradella nevertheless left a distinctive stamp on the history of music. He is situated at the intersection of several stylistic paths and periods, at the crossroads between opera and sacred drama, since his output, and especially San Giovanni Battista (St John the Baptist), marks the encounter of the great Roman oratorio inherited from Carissimi with the Venetian opera of Cavalli. Stradella is also close to the next generation, that of Scarlatti and Handel. His music is characterised by liveliness, expressiveness and profound humanity. Although San Giovanni Battista enjoyed genuine success when it was premiered in 1675, it was only in 1949 that the work was exhumed from the libraries where its score lay slumbering. That event took place in Perugia, and the role of Salome was sung by Maria Callas.

Paul-Antoine Benos-Djian has a beautiful countertenor voice, full and even at both ends of his range, which he uses to superbly expressive effect...Alicia Amo as Herodias the Daughter (Salome) is quite wonderful in her final aria, ‘Sù, coronatemi’, where she exults in John’s death with dazzling coloratura...newcomers should try this present version under the excellent direction of Damien Guillon. The important thing is to get to know this ravishing piece.