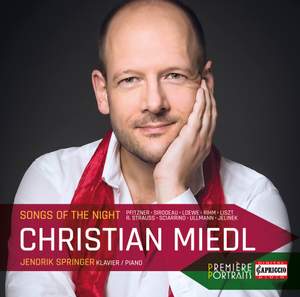 Songs of the Night

No. 3, Nachtgang (Performed with Baritone & Piano)

No. 2, Ständchen (Performed with Baritone & Piano)

Capriccio’s Première Portraits Edition supports young, talented artists by making their debut CDs available to a worldwide audience. German baritone Christian Miedl has gained an international reputation, especially in the field of contemporary music, for his highly acclaimed world premieres and national premieres of important works by Wolfgang Rihm, Peter Eötvös, Ennio Morricone, Salvatore Sciarrino and Luca Francesconi. He is the recipient of a number of prizes and awards, including the Lied Prize of the prestigious Francisco Viñas Competition in Barcelona. Opera engagements have taken him to the Teatro alla Scala Milan, Bayerische Staatsoper, Staatsoper Hamburg, Wiener Staatsoper, Staatsoper Stuttgart, Suntory Hall Tokyo, the opera houses of Lyon, Malmö, Frankfurt, Cologne, Bonn and Seattle, and the Spoleto Festival in USA.