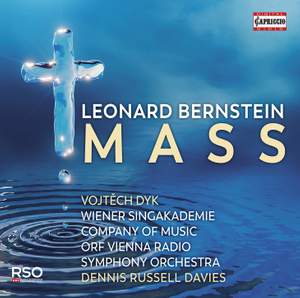 If it seemed that yet another version was de trop, Dennis Russell Davies trumps them all with a performance that can only be described as Bernsteinian, but in trumps. It’s huge, over-the-top,... — Choir & Organ, July 2020, 4 out of 5 stars More…

No. 7, Prayer for the Congregation "Almighty Father"

No. 14, Gloria in excelsis Deo

Few musicians have proved as charismatic as Leonard Bernstein. He broke down the boundaries between ‘serious’ classical music and ‘entertaining’ popular music, and few others were able to connect with people of all generations in the way he did. His entire output promoted the philosophy of living together in love, rather than with antagonism and hatred. Many of these attributes are evident in his Mass, which was first performed in 1971. In order to understand this unusual work, it is crucial to view it not as a standard mass composition, but as “a theatrical piece with the title ‘Mass’”, as Bernstein described it. It is perhaps the most daring interpretation ever of the liturgical genre. Response to its premiere was ambivalent: there was enthusiasm on one hand, and negative reaction from conservative-minded groups on the other. And the work's unequivocal message of peace was rejected in part because it could be taken as a clear indictment of the Vietnam War, which was ongoing at the time.

If it seemed that yet another version was de trop, Dennis Russell Davies trumps them all with a performance that can only be described as Bernsteinian, but in trumps. It’s huge, over-the-top, but its modish appropriations seem more routine and less jarring than they did in 1971 and Vojtěch Dyk is a charismatic celebrant, pitched just right between holiness and theatricality.

Russell Davies is fine, indeed searching, in the Meditations, and the omnipresent chorale has Bachian depth and nobility – but these moments are meat and bread to these performers, others less so.