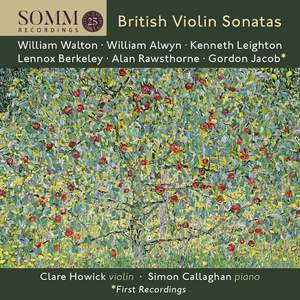 Howick and her pianist Simon Callaghan knit [the first movement of the Walton] cogently together, neatly negotiating a myriad of mood switches which could easily seem juddering. Howick’s vibrato... — BBC Music Magazine, June 2020, 4 out of 5 stars More…

Alwyn: Sonatina for Violin and Piano

SOMM Recordings pays tribute to the remarkable flourishing of British Violin Sonatas in the 20th century with a collection of music for violin and piano by six key figures of the modern chamber music renaissance in Britain. Making her debut on SOMM, violinist Clare Howick’s championing of this repertoire prompted iclassical to declare ‘the record-buying public owe [her] a debt of gratitude’. She is accompanied by pianist Simon Callaghan. From the middle of the century, and commissioned for Yehudi Menuhin, William Walton’s Violin Sonata is unique in the composer’s oeuvre with its almost constant sense of nervous uncertainty. Composed the same year (1948), Kenneth Leighton’s youthful First Violin Sonata is the product, as Robert Matthew- Walker comments in his authoritative booklet notes, of “a deep-thinking musician of whom everything he was to write, from his earliest compositions onwards, is genuinely felt and unaffectedly original”. William Alwyn’s beautifully proportioned Sonatina (1933) receives only its second appearance on disc here. Composed the following year, Alan Rawsthorne’s Pierrette: Valse Caprice is best remembered from its quotation in the composer’s soundtrack for the 1947 film Uncle Silas. The contrasted Elegy and Toccata from Lennox Berkeley’s 1951 Op.33 reveal a master craftsman in miniature, while three pieces by Gordon Jacob – Little Dancer (1959), Caprice (1969) and Elegy (1972) – all make their first appearances on disc here.

Howick and her pianist Simon Callaghan knit [the first movement of the Walton] cogently together, neatly negotiating a myriad of mood switches which could easily seem juddering. Howick’s vibrato on high notes is both sweet and tense, and fits the mood of the movement’s partially becalmed coda precisely…Too many recordings nowadays duplicate well-worn repertoire for no good reason. This one doesn’t and is notably refreshing.

Howick’s flexible tone is well suited to the fragile dissonance of Walton’s harmony…Callaghan's clean accompaniment provides a sympathetic backdrop, especially in the substantial character variations of the second movement.

Walton’s searchingly lyrical two-movement Sonata from 1948 is the masterpiece of this selection.

The most interesting work is Leighton’s, written just pre-war when he was only 19. Even so it feels old-fashioned for its time but it has, in the restless opening Allegro and deeply felt Lento that follows, like the Walton, something urgent to say beyond the clever stitching together of material.