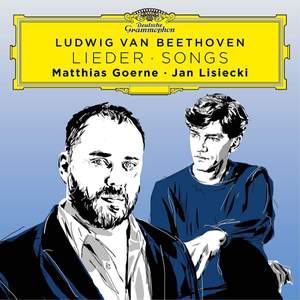 For youthful ardor I will still turn to Fritz Wunderlich in An die ferne Geliebte, yet this new release is the best Beethoven song recital I’ve heard, and it bids fair to be one of the treasures... — Fanfare, Jul/Aug 2020 More…

The Israeli soprano is sparkling and technically fearless in a programme of arias with the Academy of Ancient Music, whilst Goerne's song-recital with Jan Lisiecki is an altogether darker affair.

In 2020, the world celebrates the 250th anniversary of one of the greatest composers of all time Ludwig van Beethoven!

Though often eclipsed by his other compositions , Beethoven’s Lieder (songs) are among his most intimate, poetic creations.

This recording features 14 Lieder including two cycles: the "6 Lieder op. 48" and Beethoven's most famous song “An die ferne Geliebte op. 98” (To the distant beloved)

This record is part of DG’s global BEETHOVEN 2020 campaign.

The Globe and Mail, Toronto

For youthful ardor I will still turn to Fritz Wunderlich in An die ferne Geliebte, yet this new release is the best Beethoven song recital I’ve heard, and it bids fair to be one of the treasures in Beethoven’s vocal discography. A must-listen for lovers of Lieder in its highest expression.

Goerne’s now audibly careworn voice is well suited to this bleak, brooding programme of songs about isolation and resignation...One of the disc’s great virtues is the deft, imaginative pianism of Lisiecki, who astonishes at every turn...Some of the most moving moments are those where his animation seems to rub off on Goerne almost against his own better judgement: when the baritone sings ‘You give me youth and joy and courage’ in the vernal Maigesang, his words could easily be an address to his sprightly recital-partner.