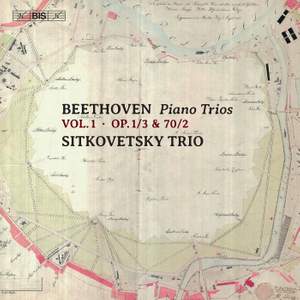 They combine a sense of dialectical urgency, crucial in this work, with a natural conversational intimacy. Pianist Wu Qian, first among equals in this music, has a limpid, sparkling touch, using... — Gramophone Magazine, June 2020 More…

With the three piano trios Op.1 Ludwig van Beethoven took a genre still largely associated with entertaining salon music, and raised it up to rival the string quartet. The works are innovative in form as well as in content especially so in the case of the Trio No. 3 in C minor, Beethovens trademark key. It is therefore fitting that the Sitkovetsky Trio has chosen this work to open their cycle of the composers piano trios. That the C minor trio was pioneering is illustrated by the fact that Haydn, who at the time was Beethovens teacher, advised against its publication. He feared that it would not be understood so quickly and easily but the world as Haydn knew it was clearly changing and the trios became a commercial success as well as harbingers of a new musical aesthetic. Some twenty years later, in 1813 when E. T.A. Hoffmann reviewed the two Op. 70 trios, the new era was firmly established, and to Hoffmann the works confirmed how Beethoven carries the Romantic spirit of music deep within his soul. Between the two complete trios recorded here, the Sitkovetskys include Beethovens very last contribution to the piano trio genre, the little Allegretto in B flat major, WoO39. It was composed in June 1812 for Maximiliane, the ten-year-old daughter of Franz and Antonie Brentano or, as it says on the title page of the autograph manuscript, for my little friend Maxe Brentano, to encourage her piano playing.

They combine a sense of dialectical urgency, crucial in this work, with a natural conversational intimacy. Pianist Wu Qian, first among equals in this music, has a limpid, sparkling touch, using the pedal sparingly...Marrying polish and imaginative flair, minutely attentive to what the composer wrote, the Sitkovetsky’s Beethoven stands up well in a crowded field and whets the appetite for future instalments.