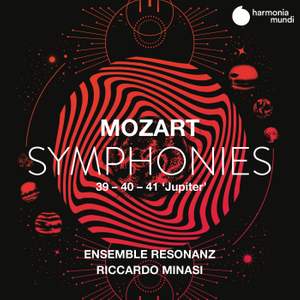 Those who consider Mozart’s meticulous phrasing is best characterised with the subtlest, tiniest inflections of articulation and tempo might find Riccardo Minasi’s occasional gentle pull on the... — BBC Music Magazine, June 2020, 4 out of 5 stars (Performance) / 5 out of 5 stars (Recording) More…

After the widespread acclaim for their previous recordings of C.P.E. Bach and Haydn, the musicians of the Resonanz Ensemble of Hamburg pursue their explorations on instruments with a ‘modern’ set-up.

Here they tackle Mozart’s last three symphonies which, it is generally agreed, “require no introduction.” And yet Riccardo Minasi does much more than introduce them: he reintroduces them to us.

The rhetorical, if not theatrical, dimension of the celebrated trilogy comes into full focus here and the result is irresistible.

Those who consider Mozart’s meticulous phrasing is best characterised with the subtlest, tiniest inflections of articulation and tempo might find Riccardo Minasi’s occasional gentle pull on the reins too much of a good thing…Finest of all is a performance of the Jupiter that in the outer movements clarifies textures and points phrases in a way that is truly exhilarating.

From the splenetically tumbling scales and omninously pounding timpani of the not-so-slow introduction, [Minasi] and his expert 35-strong band (modern instruments, period ethos) play up the music’s disruptive aspects for all their worth. With lean, vibrato-light strings and assertive wind and brass, tutti textures have an abrasive clarity.

This period-instrument orchestra’s playing is so vivid, and Minasi’s conducting so full of life, that it might seem churlish to insist on the faults: the irritatingly self-conscious slowings-up, even in a movement as driven as No 40’s molto allegro, or the same work’s self-defeatingly fast minuet. But a thrilling “Jupiter” finale makes amends.