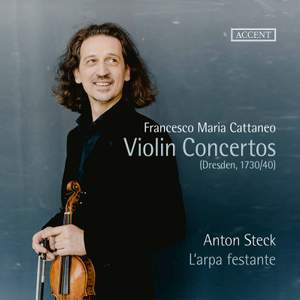 Cattaneo: Violin Concerto No. 1 in A Major 'Gradual'

Cattaneo: Sinfonia in B flat major

Cattaneo: Violin Concerto No. 2 in A major

The content of “Schranck No: II” represents the rich Dresden instrumental repertoire from the first two thirds of the 18th century with a volume of about 1,750 pieces of music. After the end of the Seven Years’ War, these musical pieces were sorted, inserted into envelopes with their characteristic detailed title labels and deposited in an archive cabinet, the aforementioned “Schranck No: II”, in the court church. Like a time capsule, this treasure was rediscovered only after the middle of the 19th century by the court kapellmeister Julius Rietz. Today, this unique collection belongs to the collection of the Saxon State Library – Dresden State and University Library. The sources of the violin concertos by Francesco Maria Cattaneo have been handed down exclusively in Dresden and all originate from the almost legendary “Schranck No: II”. Stylistically, Cattaneo drew from the musical language of his environment, whereby echoes of Vivaldi can be discerned, as well as of Hasse, who set the tone in Dresden. The three anonymous orchestral pieces for strings also originate from the “Schranck No: II”. With the combination of Italian sinfonia and French overture suite, they are exemplary of the typical reception of the so-called mixed taste of Dresden.