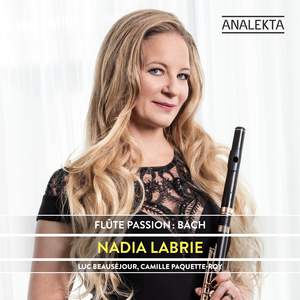 Nadia Labrie returns with an excellent second album in her Flute Passion series. This second opus is dedicated to four key works for flute by Johann Sebastian Bach, performed here with Luc Beauséjour on piano and Camille Paquette-Roy on cello. The first two sonatas on Flute Passion: Bach, the Sonata in E Minor, BWV 1035 and the Trio Sonata in G Major, BWV 1039 have four movements that alternate slow-fast-slow-fast according to the sonata da chiesa (church sonata) model. Follows the Sonata in B Minor, BWV 1030, completed around 1736, often considered the masterpiece of Bach’s compositions for flute, and Bach’s only work for solo flute, the Partita in A Minor, BWV 1013, a suite of four movements.