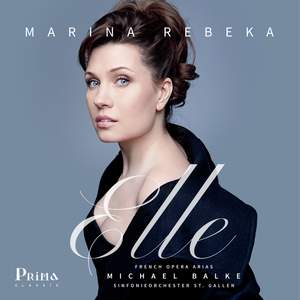 This latest disc reveals to us a mellifluous and affective vocal sensibility well suited to French operatic traditions…the orchestral playing throughout is supportive and detailed, though sometimes... — BBC Music Magazine, July 2020, 4 out of 5 stars More…

The Latvian soprano talks to Katherine about her new album of French opera arias, out now on Prima Classic.

"Elle" is Marina Rebeka's new solo album, celebrating the diversity of the female roles in some of the greatest French Opera Arias of the canon. From a sweet recounting of the pleasures of love in Charpentier's Louise, to the steely determination of Juliette in Gounod's last scene, passing through the new-found piety of Thaïs, Carmen's indomitably wild character, Chimène's extreme sadness in Le Cid, and Marguerite's transformation from an innocent girl in love into a woman longing for a man who will not return, these and the many more arias that fill this recording explore the emotional spectrum of the female roles in French Opera.

A perfect modern introduction to French Opera for the new listener as well as a valuable addition to the library of the connoisseur, Elle showcases the extraordinary art of Marina Rebeka, one of the most complete sopranos of our times, with not only a unique vocal prowess and range extension but with an unusually deep interpretative emotion, making each aria come to life in a new way.

Latvian soprano Marina Rebeka is one of the leading opera singers of our time and has gained a wide reputation as one of the greatest Verdi, Rossini and Mozart interpreters in the world. Since her international breakthrough at the Salzburg Festival in 2009 under the baton of Riccardo Muti, Rebeka has been a regular guest at the world's most prestigious concert halls and opera houses, such as the Teatro alla Scala (Milan), the Opéra National de Paris, the Metropolitan Opera and Carnegie Hall (New York), the Royal Opera House Covent Garden (London), the Concertgebouw (Amsterdam), the Bavarian State Opera (Munich), the Vienna State Opera and the Musikverein (Vienna), and the Zurich Opera House, among others. In the 2017/18 season, she was named the first ever artist in residence by the Münchner Rundfunkorchester. In December 2016, Rebeka was granted the Order of the Three Stars, the highest award of the Republic of Latvia, for her cultural achievements.

This latest disc reveals to us a mellifluous and affective vocal sensibility well suited to French operatic traditions…the orchestral playing throughout is supportive and detailed, though sometimes acoustically a little distant.

There’s no disputing the quality of the voice itself, evenly produced throughout its range, with a mixture of silk and steel in the tone, and upper registers that blaze quite thrillingly. Her dynamic range and control are often exemplary...She’s at her best here in moments of grand, tragic passion, when her heroines are in crisis...The playing from the St Gallen Symphony is good, with secure and elegant woodwind and brass phrasing, and real warmth and depth in the strings.

Though she sounds as if she might have outgrown Marguerite’s Jewel Song, her ‘Il ne revient pas’ is certainly effective, showing a woman at the end of her tether. Equally, in hurling herself at Thaïs’s ‘Dis-moi que je suis belle’, she conveys the character’s desperation. She’s at her best in ‘Ô messager de Dieu’ from the opera’s third act, suggesting the search for the spiritual that motivates the character.

The Latvian singer is nothing if not versatile….She brings a formidable dramatic attack, reminiscent of Callas or Régine Crespin, to Massenet’s Salomé and Chimène (in Le Cid), and sensual lyricism to his Thaïs, but she’s a bit fierce for Gounod’s delicate heroines Marguerite and Juliette.

A radiant, secure and warm high register, a strong, full depth: not many sopranos have such a rich voice with such rare
luminosity as Marina Rebeka. The radiant voice and the wide range of colours are beautiful, with that degree of truthfulness that
makes her performances generally so phenomenal.

Behind the pronunciation of the word, you can feel the will to characterise it. The mastery of the effects here makes wonder, from the first track, Louise's Depuis le jour, with its gradual management of the breath and its tapered notes like sugar.

Close your eyes and listen to Marina Rebeka’s gorgeous voice, and you might just find yourself transported away from the confines of your home for an hour of scintillating French music.

A very natural voice, with a strong lower register and an exquisite, nuanced legato, crowned by powerful high notes and filati and a middle voice of great quality.

After the two pieces from "Romeo et Juliette", "Je veux vivre dans ce rêve" and "Dieu! quel frisson", the listener at home only wants to break out in applause.

She is a soprano assoluta because of her perfect output, her technical skills, the extension of her voice, and her ability to adapt to different roles - from those requiring lyrical coloratura to those initially written for a mezzo-soprano.

The album conquers from the first aria, Depuis le jour, from Louise of Charpentier, with superb technique and vocal dedication,
and makes the listener actually fall in love in Gounod's Je veux vivre , with a warm and generous timbre!

A highly recommendable album to continue enjoying the voice and art of the Latvian soprano Marina Rebeka who, once again,
shows us why she is one of the great sopranos of the world today. A jewel of a record.