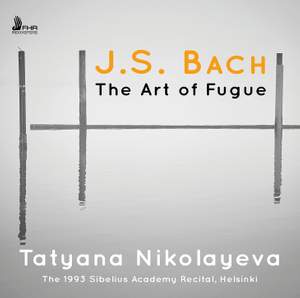 Her artistry in this Helsinki concert is consummate and her memory almost faultless. With a warmly lyrical opening, and a touch responding to the variegated requirements of the score, she makes... — BBC Music Magazine, June 2020, 5 out of 5 stars More…

The greatest Bach player of her generation, Russian pianist Tatyana Nikolayeva delivered this incredible live performance just a few months before her death. This recording is published for the first time on FHR, with the kind permission of the Tatyana Nikolayeva estate. This is one of the last recordings of Nikolayeva.

Although The Art of Fugue work was long thought to have been written on Bach's deathbed, recent research has shown that he was working on it during the early 1740s. The autograph from this time comprises fourteen movements (twelve fugues and two canons), but at the end of his life Bach revised the unpublished work adding two fugues and two canons. Engraving of the plates for publication began during the last months of Bach's life and he was able to proof read some of them albeit with failing eyesight. However, when the work was published at the end of 1751 Bach was already dead and the last fugue left incomplete.

In creating his The Art of Fugue Bach proved that he was master of the form but in the hands of a musically intuitive interpreter such as Tatyana Nikolayeva it becomes one of the masterpieces of a world genius.

Her artistry in this Helsinki concert is consummate and her memory almost faultless. With a warmly lyrical opening, and a touch responding to the variegated requirements of the score, she makes this long musical journey an intensely beguiling experience. The last note suggests an electric current suddenly switched off.

This live performance from Helsinki’s Sibelius Academy dates from even near the end of her life – April 1993 – and the wisdom of a lifetime’s immersion in Bach is evident everywhere. Contrapunctus III sums up the clarity, imagination and mastery of her voice-leading, while the final, unfinished Contrapunctus XIV carries the weight of the world. No completion, the music just trails off.