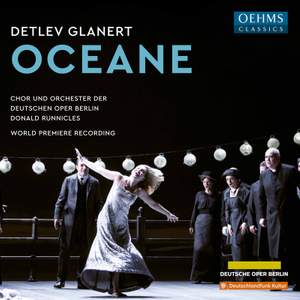 Detlev Glanert (*1960) is a contemporary German composer who found early success with his opera „Der Spiegel des großen Kaisers (“The mirror of the big emperor“), which won the Rolf Liebermann opera award in 1995. His newest stage work is “Oceane.” The premiere took place on April 28, 2019 in the Deutsche Oper Berlin and enthused the audience and critics and was hailed as “one of the most exciting new operas of recent times“ by Berlin Newspaper “Der Tagesspiegel“. Glanert and the writer Hans-Ulrich Treichel conceived the libretto, loosely according to Theodor Fontane's fragment “Oceane von Parceval“. It tells the story of Oceane, a mystical female creature of the sea, that comes to land in search of the ability to feel emotions. The world premiere recording was recorded by the Orchestra and Choir of the Deutsche Oper Berlin under the baton of Donald Runnicles. Maria Bengtsson excels with her ethereal silver soprano voice in the title role; the tenor Nikolai Schukoff as Martin von Dircksen succeeds in portraying the human inability to recognize the true essence of a creature beyond a dazzling exterior

Glanert’s music renders the action with captivating vividness. The opera is fabulously populated...And the fit of voices to roles is clearly evident. Maria Bengtsson’s exquisite vocal qualities—crystalline tones that radiate colour—are ideal for the role of Oceane...Donald Runnicles leads cast and orchestra with aplomb and precision, and the recording has both clarity and a sense of space.

Glanert’s music is very approachable – the opening of the opera is stunning, with the soprano voice emerging from washes of choral sound, and the orchestral effects for sea and storm are exquisite. It is tonal and rhythmic and the music sings well, with the vocal line supported on the orchestral cushion. Donald Runnicles’ conducting makes the most of Glanert’s orchestral textures, and the cast is strong.