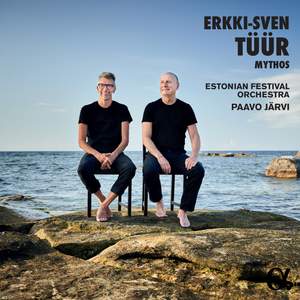 Cast in a single movement, this thrilling 35-minute work [Mythos] explores new pathways for the composer in an idiom entirely modern and his own while at the same time, inspired by Finno-Ugric... — BBC Music Magazine, June 2020, 5 out of 5 stars (Performance) / 4 out of 5 stars (Recording) More…

The Estonian composer talks to David about his new album of three world premieres on Alpha, with long-time friend and collaborator Paavo Järvi and the Estonian Festival Orchestra.

Paavo Järvi conducts the Estonian Festival Orchestra in three works by his long-time friend and musical collaborator Erkki-Sven Tüür - the 'Mythos' symphony, 'Incantation of Tempest' and 'Sow the Wind...'

Erkki-Sven Tüür, born in Estonia in 1959, writes music that is characterised by intense energetic transformation. The intuitive and rational approach is synthesised into a complete organic system. He is the composer of nine symphonies, ten concertos, numerous chamber works and an opera. Dedicated to his compatriot Paavo Järvi and composed to mark the centenary of the Estonian Republic in 2018, Tüür’s Ninth Symphony is entitled Mythos. According to the composer, this refers to the myths that arise about nations and how they have acquired their independence, and also deals with the long history of the Finno-Ugric peoples. Paavo Järvi and his Estonian Festival Orchestra have made the world premiere recording of this work, along with The Incantation of Tempest (Tormiloits, 2004), dedicated to the Estonian composer Veljo Tormis, and Sow the Wind, composed in 2015, inspired by climatic ‘gusts of wind’ and ‘whirlwinds’.

Cast in a single movement, this thrilling 35-minute work [Mythos] explores new pathways for the composer in an idiom entirely modern and his own while at the same time, inspired by Finno-Ugric mythology, delivering an emphatic testament to Estonian independence and national identity. ..The symphony feels hewn from a single block of granite without sacrificing any richness of local colour or invention.

It’s almost an indulgence to put three such significant, nonconcertante orchestral works by Erkki-Sven Tüür, played by a virtuoso orchestra, on a single release...Sibelius and Lindberg loom large in [the Symphony]…[[Incantations of Tempest] a muscular piece, minimalistic in concept only and another example of Tüür’s fascinating way with the orchestra.

For an orchestra that only came into existence in 2011 the unity of sound easily rivals that of much longer-established ensembles; Järvi and his players (a combination of Estonian emerging talent and top-rank international performers) seem to have an instinctive grasp of Tüür’s idiom, communicating his sweeping gestures in perfect coordination as if they were one musician.