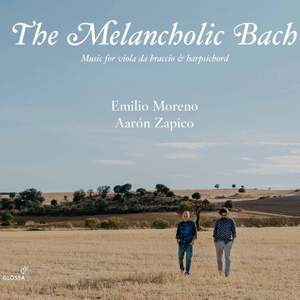 With The Melancholic Bach, Emilio Moreno delves pensively and wistfully into the realms of the music that Bach might have written for the viola. This new Glossa album is in fact, by turns, a reflective but also an uplifting treat from beginning to end. Moreno, of course, is a violinist as well as a violist: with the former he has been directing his ensembles La Real Cámara and El Concierto Español, whilst with the latter instrument for many years he has been leading the violas of Orchestra of the 18th Century. Knowing the Johann Sebastian Bach of concertos, sonatas, partitas and of many other pieces Moreno has yearned for there to be parallel repertory from the great master playable on the viola  and it is recorded that Bach himself excelled on the viola and was fully aware of its soloistic potential as well as its gently melancholic timbre (so suitable for those crucial Bachian inner harmonies). Aside from established obbligato viola pieces Bach's copious oeuvre did not bear much fruit, so with harpsichordist Aarón Zapico (who has previously accompanied Moreno on Boccherini and Castro albums), Moreno set about creating a representative demonstration of pieces which he could play on a 1751 Sympertus Niggel viola da braccio. For The Melancholic Bach Moreno adapted movements from a range of Bach's trio sonatas, cantatas and organ chorales, with the viola taking the melody line and the harpsichord the other two parts.