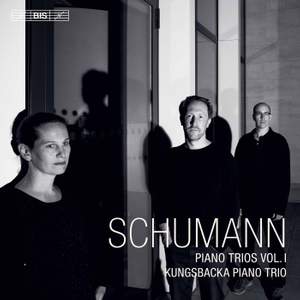 The sound itself is very natural and the piano is captured with admirable warmth, but the strings, and especially the violin, are just a shade too distant. — BBC Music Magazine, June 2020,

It was in 1842, his year of chamber music that Robert Schumann took on the combination of violin, cello and piano for the first time. He seems to have decided against releasing the resulting Fantasiestücke as a fully-fledged piano trio, however, but later returned to the work, revising it for publication. The model here is not the large-scale, quasi-symphonic trios of Beethoven or Schubert instead Haydns characteristic trio textures spring to mind, especially in the first two movements where the cello largely follows the pianos left-hand bass line. By the time the Fantasiestücke was published in 1850, Schumann had already written two proper piano trios, No. 1 in D minor and No. 2 in F major. According to the composer the second of these makes a friendlier and more immediate impression but it is in fact the D minor trio that has long been the more popular: passionate, mainly extrovert and bursting with fine thematic material it is the easiest to grasp on one hearing. Both works are filled to capacity with imitative writing, sometimes conspicuously so but often subtly as if on a subconscious level an aspect that the members of the Kungsbacka Piano Trio, with more than 20 years of playing together, are able to make the most of.

The sound itself is very natural and the piano is captured with admirable warmth, but the strings, and especially the violin, are just a shade too distant.