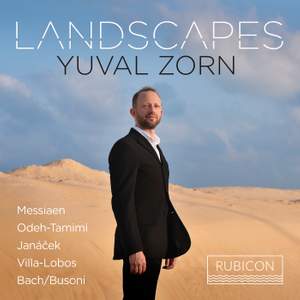 Yuval Zorn’s debut album is a truly original and fascinating recital crossing continents from the turbulent revolutionary streets of a violent eastern Europe, to exotic birdsong in the south of France, the tense middle east, the vivid contrasts of Brazil and finally to 1732 Leipzig and the quiet contemplative world of J.S Bach’s famous Chorale Prelude transcribed by Busoni.

“The pieces on this album are a reflection of the world of the composer who wrote them, both internal and external. They have all been written in different contexts, different countries, different historical circumstances and different means of pianistic expression, but all of them - each in its own way - represent the composer’s human stance toward that context. This context is what I see as a landscape, not only in the physical sense but in a much broader sense, a landscape that is a mirror of the pattern of one’s internal being” - Yuval Zorn

Yuval Zorn’s first solo album as a pianist offers 20th- and 21st-century works, each representing its composers’ relationship with their surroundings. Commendable accounts, full of drama.

It’s not enough for Yuval Zorn to be one of today’s most distinctive symphonic and opera conductors; he’s also a fabulous pianist blessed with a natural technique and big, colourful sound...Perhaps Zorn’s long experience in front of orchestras informs his intelligent parsing of the massed chords and decorative flourishes throughout Messiaen’s ‘Le merle bleu’...An impressive release on all counts, and highly recommended.