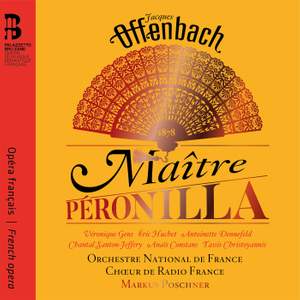 There is more Spain in Offenbach’s brain than in Spain itself’, said a journalist entranced by Maître Péronilla. Understandably so, given the charm and humour of this operetta in which no fewer than twenty-two characters are kept busy unravelling a preposterously complicated love story. And the libretto is all the better for having been penned by the composer himself.

Castanets, tambourines and triangle merrily punctuate one of Offenbach’s last scores, which multiplies impressive vocal ensembles while not renouncing intimate numbers of great poetry. Our world premiere recording features specialists of this repertory such as Éric Huchet and Loïc Félix, but also opera singers more unexpected in this context – including Véronique Gens – who audibly delight in letting their hair down in such joyful company, ably supported by the talents of the Orchestre National de France and the Choeur de Radio France.

Bursting with cod-Spanish colour (the castanet-player certainly earns their keep), infectious melodies and sparkling ensembles, this 1878 opéra bouffe about a chocolate-maker’s attempts to arrange a lucrative marriage for his daughter has an appropriately sweet centre, with Chantal Santon-Jeffery bringing real pathos to the trouser-role of Alvarès and newcomer Anaïs Constans making a strong impression as the heroine Manoëla.

Written in 1878, this is vintage Offenbach with a Spanish accent, sung delightfully by stylists such as Véronique Gens, Eric Huchet, Antoinette Dennefeld and Anaïs Constans. Markus Poschner conducts with vivacious Hispanic elan.