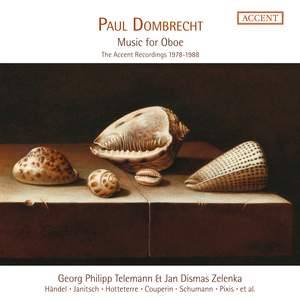 This 7-album set presents the complete recordings made by Paul Dombrecht on the Accent label. Few Flemish woodwind players are as renowned as Dombrecht, whose name is well-known to all budding oboists. The recordings were made between 1978 and 1988 and include music by Telemann, Zelenka, and other baroque composers as well as music for oboe from the romantic period. Dombrecht teams up with Wieland Kuijken, Robert Kohnen, Jos van Immerseel, and other fine early music specialists. Paul Dombrecht performs the oboe on period instruments as well as the modern oboe. He is a much sought-after soloist all over Europe, who plays frequently with other prominent musicians and Baroque orchestras. Along with his profound knowledge of early music, he is also a virtuoso on the modern oboe, performing the complete repertoire for the instrument, including the 19th and 20th centuries. In addition to being an oboist, Paul Dombrecht is active as conductor and artistic director of the Baroque orchestra (and choir) Il Fondamento, which he formed in 1989, the wind ensemble Octophoros and the Paul Dombrecht Consort. As a musical director of these ensembles he advocates as intuitive and honest musical approach. As a conductor, he performs works ranging from chamber music to large-scale productions and opera.