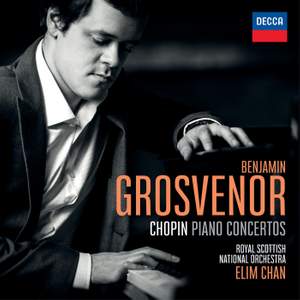 Grosvenor takes a slightly old-fashioned approach that works both in his favour and disfavour here. With playing that can be quite big-boned, he occasionally sacrifices the elegance of his music... — BBC Music Magazine, April 2020, 4 out of 5 stars More…

Grosvenor takes a slightly old-fashioned approach that works both in his favour and disfavour here. With playing that can be quite big-boned, he occasionally sacrifices the elegance of his music on the altar of the modern concert grand, yet he has already lived with these works for long enough to strike a balance between thoughtfulness and youthful spontaneity…Chan and the RSNO offer solid support.

Grosvenor’s touch is phenomenal, and he can deliver a wide range of color and tone. A less complete musician could make his reputation entirely on the gossamer rapid passagework that Grosvenor displays to enchanting effect in the finale of Concerto No. 2. But he doesn’t tiptoe around in the slow movements, not only creating a beautiful flowing line but applying some strength to the unfolding melodies.

[Grosvenor’s] lines are full of poetry but they unfold with utter naturalness. Chan follows his every gesture unerringly – there’s no doubting the musical chemistry at play here…Grosvenor has also been blessed with a very fine instrument and a fabulous recording. It’s the kind of disc that makes you rethink these works and appreciate them all over again. And let’s hope that this is the start of a wonderful recording partnership with Elim Chan.

Superb in so many ways, though, Grosvenor’s performances will appeal to those who feel Chopin’s early and effusive style needs a touch of severity. Elim Chan’s partnership is entirely in sympathy, and the recording is excellent.

Technically he has nothing to fear from comparisons with Argerich, Pires or Zimerman, and this is a young man’s music...He embellishes the melodic line exquisitely, giving the lyrical interludes in the bravura outer movements a singing cantabile and limpid tone. Chan and the RSNO are willing accomplices, matching Grosvenor’s patrician musicianship with panache and style.

Grosvenor’s playing is thoughtful and fresh, with flecks of rubato, quizzical pauses and tumbling, fast-fingered runs. They help to bring spontaneity to concertos that, despite their beauties, need assistance to fully come alive. He is especially winning in spinning the lightly melancholic reverie of the first concerto’s larghetto.