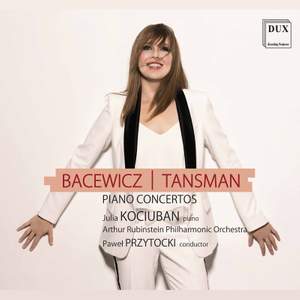 The history of Polish music has seen many cases of instrumentalists and composers who enjoyed great success abroad while collecting several neutral or negative reviews in our country. This group of distinctive, outstanding artists of the twentieth century undoubtedly includes Alexandre Tansman - an artist who would constantly win the hearts of listeners around the world with his works (including France, the United States, or Japan), whereas in Poland he was almost completely marginalised during his lifetime.

This album by Julia Kociuban includes the Piano Concerto No. 1 of Alexandre Tansman. For years, the popularity of Grazyna Bacewicz’s piano works has been dominated by the worldwide success of the Piano Sonata No. 2 composed in 1953, of which Julia Kociuban is an unsurpassed interpreter. In addition to Tansman’s work, the artist decided to familiarise the audience with the equally interesting, though almost completely forgotten, Piano Concerto by the Lodz composer.