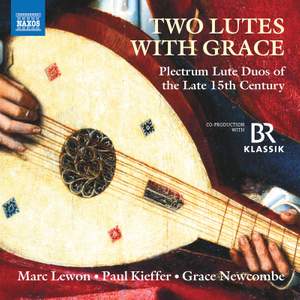 I. Saltarello (Arr. for Lute Duo)

Agricola, A: Gaudeamus omnes in Domino

"The plectrum lute duo was one of the most popular ensembles for professional instrumentalists in late 15th-century Western Europe. This recording presents for the first time the bulk of a surviving repertoire that can arguably be considered for the lute duo, performed on two equal plectrum lutes or with a combination of lute and gittern – a smaller member of the lute family. The album, inspired by the Ferrarese virtuoso Pietrobono dal Chitarino (c. 1417–1497), acclaimed in his lifetime as ‘the foremost lutenist in the world’, includes the earliest printed lute duos by Francesco Spinacino and Joan Ambrosio Dalza and the two-voice instrumental works by

Johannes Tinctoris. The often highly ornamented instrumental duos are mostly reworkings of songs, some of which are given here in a performance with the singer Grace Newcombe to provide the context for the lute arrangements that follow."