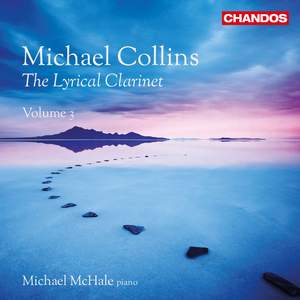 The sequence concludes with by far the largest item, Michael Collins’s own version of Franck’s Violin Sonata. Delivered by both artists with much panache, this handsome masterwork has an innately... — BBC Music Magazine, April 2020, More…

Michael Collins MBE is one of the most complete musicians of his generation. Continuing his distinguished career as a soloist, he has in recent years also become highly regarded as a conductor and in 2010 took up the position as Principal Conductor of City of London Sinfonia; he works with leading orchestras around the world both as a soloist and as a conductor.

Committed for many years to expanding the repertoire of the clarinet, he has premiered works by some of today’s most highly regarded composers, including John Adams, Elliott Carter, Brett Dean, and Mark-Anthony Turnage. In addition to commissioning and supporting new compositions, he is also a champion of well-crafted arrangements for the clarinet of works originally for other instruments. It is this area of his work that is so vividly demonstrated in the Chandos series The Lyrical Clarinet, of which this is the third volume. Most of the arrangements on this album were made by the pianist Michael McHale, who accompanies Michael Collins on the recording.

The sequence concludes with by far the largest item, Michael Collins’s own version of Franck’s Violin Sonata. Delivered by both artists with much panache, this handsome masterwork has an innately mellifluous quality which suits the clarinet well…The one original work is Philippe Gaubert’s Fantaisie…with a virtuoso finish that Collins brings off in spectacular style.

A new CD from Michael Collins is like walking into a three-star Michelin restaurant: you don’t know exactly what’s on the menu but you know whatever is on offer is going to taste wonderful..One has to salute the extraordinary facility and irresistibly seductive, lyrical grace of Michael Collins’s playing, surely one of his instrument’s greatest living exponents.