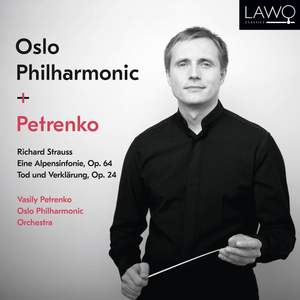 So many excellent Strauss Alpine Symphonies have rolled off the recording production line in recent years, all with something individual to say. Vasily Petrenko’s in his latest invaluable Strauss... — BBC Music Magazine, May 2020, 4 out of 5 stars More…

Oslo Philharmonic Orchestra and Vasily Petrenko offer here the third and final release in a series of recordings of Richard Strauss’s orchestral music. On this CD the listener is presented with the tone poems “Eine Alpensinfonie” and “Tod und Verklärung”, works that long have been part of the Oslo Philharmonic’s repertoire.

Vasily Petrenko, who has been the orchestra’s chief conductor since 2013, takes full advantage of the Philharmonic’s distinctive style in the performance of this exciting and virtuosic music.

Vasily Petrenko is one of the most significant figures on the classical music scene today, and he has won numerous accolades for his recordings of the Russian repertoire, including two Gramophone Awards. With Oslo Philharmonic Orchestra he has recorded works of Shostakovich, Szymanowski, Strauss and Prokofiev, as well as a large cycle of orchestral works of Alexander Scriabin.

Oslo Philharmonic Orchestra first saw the light of day in 1919, and over the next half-century the orchestra’s reputation grew steadily. In 1979 the conductor’s baton passed to Mariss Jansons, and under his leadership Oslo Philharmonic achieved its full potential and became a rival to the great philharmonic orchestras of Vienna, Berlin and New York.

So many excellent Strauss Alpine Symphonies have rolled off the recording production line in recent years, all with something individual to say. Vasily Petrenko’s in his latest invaluable Strauss disc with the Oslo Philharmonic does so majestically, refusing to be rushed either in the great blazes or – most fascinating – at the moment Strauss moves from the panoramic sphere to the personal.

Alongside a glowing, moving performance of Death and Transfiguration, their Alpine Symphony is bold and vivid, with waterfalls so glittering you can practically feel the sting of the ice-cold spray, a sweeping, joyous view from the top, and a whirling gale-force storm.