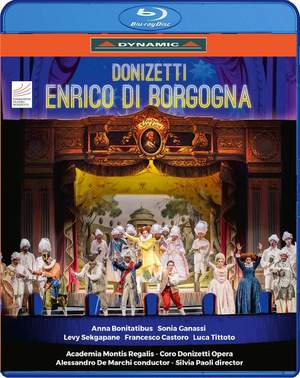 [De Marchi] He actually conducts the whole performance with vigor and with elegance, bringing out the sparkling humor where needed. Perhaps the high point of this first work by Donizetti is the... — Fanfare, January/February 2020 More…

Enrico di Borgogna is a melodramma per musica that was premiered in Venice in 1818, marking Donizettis stage debut. The plot of this rarely performed opera follows a rather traditional scheme: Enrico wants to defeat the son of the villain who usurped his fathers throne and is about to marry his beloved Elisa. Fortunately, he succeeds in stopping the marriage and regaining his inheritance. This release is a world première video recording of the 2018 Donizetti Opera Festival performance, which received excellent reviews for its brilliant staging. Director Silvia Paoli uses a theatre within the theatre approach which produces moments of sheer humour and amusement and, as the curtain opens, the public is transported back to the time of the opera's première. Played on period instruments by the Academia Montis Regalis and conducted by repertoire specialist Alessandro De Marchi, this opera features prima donnas Sonia Ganassi and Anna Bonitatibus in the main roles.

[De Marchi] He actually conducts the whole performance with vigor and with elegance, bringing out the sparkling humor where needed. Perhaps the high point of this first work by Donizetti is the act II duet between Enrico and Elisa, “Taci!... Tu cerchi indarno.” This is bel canto at its best; both singers are in top form, with Bonitatibus again being something special. This new Donizetti discovery, with splendid singing and playing as well as an amusing production, is highly recommended.