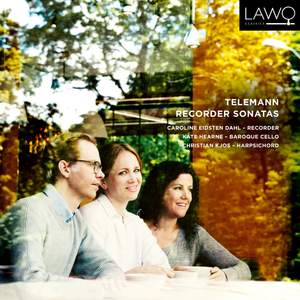 A sprightly collection of recorder sonatas, with plenty of forward momentum, measured breath control and balance of sound. A few lapses in tuning aside, it’s a well-produced, reliable disc. — BBC Music Magazine, April 2020, 3 out of 5 stars More…

Telemann: Sonatina TWV 41:a4 in A minor

Telemann: Sonata in B major, TWV 41B3

2014 saw the release of Caroline’s debut solo album “Blockbird - Norwegian Recorder Music” (LWC1069) receiving rave reviews both on the home front and abroad. This was followed in 2018 by the release of “Sonata Norwegica”

She is accompanied on this recording by Kate Hearne on the baroque cello. Born in Dublin, Ireland, Kate is a graduate of the Royal Irish Academy of Music and Stockholm’s Royal College of Music. Equally at home on the baroque cello as on the recorder, she plays both instruments professionally and tours extensively as a soloist and chamber musician, performing with an array of baroque

They are joined by Christian Kjos on the harpsichord. Christian is a very active continuo player playing with orchestras such as Barokkanerne and the Norwegian Baroque Orchestra and has performed under the direction of Ton Koopman and Andrew Manze.

A sprightly collection of recorder sonatas, with plenty of forward momentum, measured breath control and balance of sound. A few lapses in tuning aside, it’s a well-produced, reliable disc.

As for the performance itself, the players all mesh quite well in terms of ensemble. Dahl performs the often difficult lines with clarity and ease, while the continuo is expertly done. The disc is certainly on a level with the many others, and thus one must make a choice as to which one would like in their collection. This performance ranks highly and should be considered.