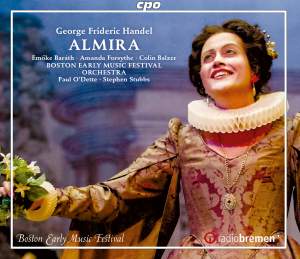 The Boston Early Music Festival has recorded George Frideric Handel’s very first opera, Almira, Queen of Castile, with a superlatively sumptuous ensemble. For its previous recordings of Baroque operas this successful ensemble has won prizes such as the Grammy, the German Record Critics Annual Prize, and the Echo Klassik. The Hungarian soprano Emõke Baráth sings the role of Almira with a choice ensemble of singers, all of whom have performed in the world’s most renowned concert halls and opera houses. Handel’s Almira is based on a freely invented plot featuring fine entertainment in the form of love and marriage schemes among the nobility, infidelity and mistaken identities, and a happy ending brought about by a court servant’s negotiations. This work was presented at the Hamburg Opera House in 1705 about twenty times and with great success.