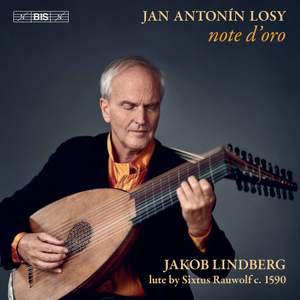 Lindberg’s passagework and articulation are completely controlled, and his ability to balance the sound across the instrument and its range is impressive...the recorded sound is warm and natural,... — Fanfare, Jul/Aug 2020 More…

Losy: Lute Suite in A Minor

Jan Antonín Losy was born around 1650 of a prosperous Bohemian family. After the death of his father, the first Count of Losinthal, he inherited not only his title but also considerable wealth. He was therefore able to devote his life to music, and his skill as a lutenist became famous throughout Europe. Unlike professional players, Losy had no need to sell or publish his music but fortunately it has survived in numerous manuscript copies. Today we have almost 200 pieces by Count Losy, many of which once belonged together in larger suites or partitas. On this new release, lutenist Jakob Lindberg explores these works. Jakob Lindberg has made numerous recordings for BIS, many of which are pioneering in that they present a wide range of music on album for the first time. He has brought Scottish lute music to public attention, demonstrated the beauty of the Italian repertoire for chitarrone and recorded chamber music by Vivaldi, Haydn and Boccherini on period instruments.

Lindberg’s passagework and articulation are completely controlled, and his ability to balance the sound across the instrument and its range is impressive...the recorded sound is warm and natural, just right for the intimate nature of the lute. Although one has come to expect this kind of quality from both Jakob Lindberg and from BIS, it is still gratifying (and a boon to listeners) every time.