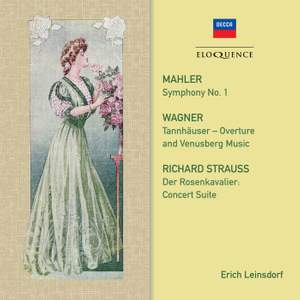 Leinsdorf scored an enormous personal triumph early in his first season (1962-63) as the Boston Symphony's Music Director with Mahlers First Symphony. The RCA recording they made together duly captures much of the brilliance and dash of their live chemistry in the work, and for months after its release it remained one of the best-selling classical albums in the US. Leinsdorfs remake of the symphony in London almost a decade later, for the Phase 4 sublabel of Decca, has enjoyed a less storied reputation, but on its first release it was preferred to the BSO version by the doyen of Mahler critics in the UK, Deryck Cooke. The Mahler was Leinsdorfs second album for Phase 4 after a typically lucid pairing of Wagner and Richard Strauss made in 1969. Bleeding chunks they may be, but in fact Leinsdorf rejected all the available suites from Der Rosenkavalier and made his own, observing both the chronology and the expressive narrative of the opera, and critics again found they preferred his version to any other. Leinsdorf lacked for nothing in terms of both confidence and experience on the podium, as his supremely lucid writings on the subject of conducting make abundantly clear, and he could win the absolute trust of orchestras  even ones as hard-bitten as the LSO  within a single rehearsal. Live recordings of his Rosenkavalier complete have become sought-after collectors items, but (like the Mahler) this Phase 4 album in sumptuous sound has been available only within a much larger box-set: this handy reissue should delight all lovers of propulsive, full-blooded performances of Romantic classics. For those who want big, splendid orchestral sounds, the total is a notable record  If you want a Rosenkavalier suite, this offers gorgeous, realistic sound, an extremely vigorous and yet sympathetic performance and the least number of fractures, awkward transitions, and simple lapses into vulgarity. High Fidelity, October 1970 (Wagner/Strauss) A good, solid large-scale recording, beautifully engineered  musically and electronically  with scope, dimension, clarity, and a good deal of power. Leinsdorf and these excellent English musicians succeed in sorting out the vastly overlong and difficult finale to this remarkable work, and the sonics of this recording are not the least of its attractions. High Fidelity, October 1972 (Mahler) Although Leinsdorf might not be as poetic as Kubelik, his is a strong and colourful version, finely controlled and built with sustained concentration. The recording, with brass well forward, is one of the best made in Deccas Phase Four system. Penguin Guide, 1982 (Mahler) *FIRST CD RELEASE ON DECCA