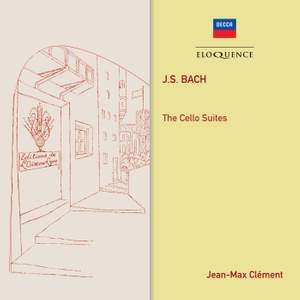 Newly remastered from the original L'Oiseau Lyre tapes, a little-known Bach recording in the true French style. The modern phenomenon of the Cello Suites as a staple of any record collection may be laid at the feet of the Catalan cellist Pablo Casals, whose HMV recording, released in 1939, belatedly placed the set alongside The Well-Tempered Clavier and the solo violin works as a cornerstone of Bach's instrumental output in the consciousness of listeners who could not play a note of his music. Another two decades elapsed before a new generation of cellists took up the mantle of Casals in the LP era. Among their select number was Jean-Max Clément, whose 1958 studio recording for L'Oiseau Lyre was released two years later. By then he had made a notable concerto appearance in London with Sir Thomas Beecham 'His tone was very small indeed', reported The Times, 'but it was of such rare beauty and refinement that we could have listened to him all night. Like his contemporaries such as Fournier and Starker, Clément used a four-string cello to play the five-string Sixth Suite, and his portamento and rubato belong to Bach performance of a different era: not until Anner Bylsma's 1979 recording would a historically informed set of the Cello Suites achieve wide circulation. However, the unostentatious elegance and refined taste of Clement's playing offer rewards of their own, especially in repertoire that finds Bach at his most French in style. The original LPs have long been sought after and fetched exorbitant prices. This new Eloquence reissue sheds light on both the French cello school and on the ever-evolving nature of Bach interpretation. The booklet includes a new essay from Peter Quantrill, placing both the suites and the recording in context. 'Clément has an excellent sense of phrasing, and conveys all that one needs of the dance-like character in each movement.' Gramophone, October 1960 'The Jean-Max Clément cycle has much to commend it.. The music-making has a spontaneity, leaving the favourable impression of music freshly composed and being created on the wing. He draws a big, rich, full-bodied sound from his instrument, and his varied vibrato endows his playing with a wealth of tonal shadings. This is certainly a premier league set, in admirable sound for its age' MusicWeb International

His playing is delicate, and he knows how each of the varying dances ought to be performed: not in raucous and deliberately diverse succession, but rather with a grace and dexterity that gives them form and structure.