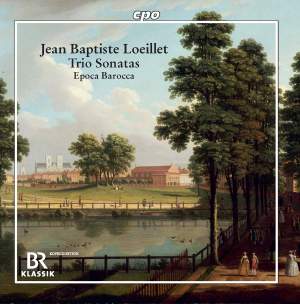 Jean-Baptiste Loeillet was from a Flemish family whose members included a number of musicians, two of whom went by the name of Jean-Baptiste Loeillet. Already in the eighteenth century this onomastic fact caused irritation and confusion. Our Jean-Baptiste, who later enjoyed a career as John Loeillet in London, was born in Ghent in 1680. What motivated him to go to London when he was a young man? Unfortunately, our sources are silent about this matter. However, he is termed »Mr John Loeillet« in printed editions, which perhaps reflects the fact that he chose London as his home in the 1720s. His Trio Sonatas for flute (transverse flute and recorder), oboe, and basso continuo are virtuosic and multilayered. Galant tones endow the sonatas with rhythmically finely pointed, flowing tone clusters. The members of the EPOCA BAROCCA chamber music ensemble interpret the trio sonatas on original Baroque instruments and with their trademark passionate verve.